50 Reasons to Freelance After 50

Okay... it's really more like five or ten, but I had Paul Simon on the brain when I wrote this.

More and more people aged 50 and older are discovering the joys of freelancing.

In fact, more people in every adult generation are freelancing. "Freelance Forward: 2021," the most comprehensive study of the U.S. independent workforce to date, found that 59 million Americans performed freelance work in 2021, representing 36% of the entire U.S. workforce.

Nope. Not by a long shot.

The Pew Research Center says that 20% of U.S. freelancers are over the age of 50, and nearly a third of those are over 65.

There are several reasons the 50+ crowd joined the freelance revolution. (Okay, "revolution" may be too strong a term, but it's certainly a growing trend.)

The reasons vary, and I'll tell you a little secret: They don't differ that much from younger freelancers. That said, the freelance job site Upwork mentions four key drivers:

According to Forbes (and my wife, whom I interview in the first episode of the Freelancing After 50 podcast), freelancing entices so many people 50 and older because it gives them the flexibility to work where and when they want.

The "where" I get — the world is your oyster — but the "when" is another matter. Even though you're not tied to a desk from 8 to 5 doesn't mean you can lollygag all day. Clients still have deadlines they expect will be met.

Maybe it's because I'm older, and my brain's neural network channels are so deeply ingrained from years as an employee, typically, I still get to work no later than 8:30. Nevertheless, it is the knowledge that I can choose to goof off and start at noon (or 4 a.m.) if I like that is so appealing.

Here are a few more reasons…

Amid The Great Resignation, more professionals are considering freelance work; 56% of non-freelancers say they are likely to freelance in the future.

Because They Want To

Although I can't speak for older Gen Xers, I can say that we Baby Boomers are a different breed. Some have retired early (i.e., before their 65th birthday) and find time on their hands. Even those of us who are older (I'm 66) aren't ready to just sit back in our Lay-Z-Boy and binge-watch Netflix (or Hulu or Amazon Prime) all day.

Late-career freelancers see freelancing as a transition toward retirement, including 60% of those 50 to 64 and 69% of freelancers 65 and older, Forbes said.

Since it's still rare for employers to offer phased retirement programs where people gradually shift from full-time work to working part-time or not at all, freelancing could be an alternative. (Jeri Sedlar, a retirement expert and author of “Don't Retire, REWIRE!” said that.)

Because They Have To

There are at least three reasons older people freelance out of necessity: they got fired or laid off, can't live on retirement income, or have a disability that prevents them from working a typical job.

Face it, workforce ageism is still alive and well (that's a topic we'll cover in another newsletter). ProPublica says that if you're over 50, the chances of losing your job are pretty good.

That's how I got back into freelancing. I was laid off... let go... fired from a marketing job. I won't say it's because of my age — my employer chalked it up to Covid's effect on the company cutting into the bottom line — but I realized that at age 64, many would not consider me an attractive candidate. So, I put on my big boy pants and said the heck with it. I'm striking out on my own. That was nearly two years ago, and I'm still at it!

Another aspect of the "have to" reason is that Social Security doesn't cover many older people’s expenses, and that don't have enough saved to retire (or retire comfortably).

The "have to" group also includes people with physical or mental health issues that would make it challenging to work in a traditional office setting. The same is true for those caring for older or younger family members.

If you find yourself in either of those situations, my encouragement is to consider freelancing. You likely have a skill set that you could leverage into an income-generating career, if not full-time, at least part-time.

Forbes added that 42% of older freelancers who responded to a survey by Freelancer's Union say they work for themselves because they "can't work for a traditional employer." That's me to a "T." I make a terrible employee... comes from having parents who were both small business owners, I suppose.

One more reason to freelance: You get to work in your sweatpants.

To finish off, here's a list of reasons that people mentioned in response to a LinkedIn post:

"A big part of why I was able to 'selectively retire' at 57 was due to the supplemental income freelancing offers." ~ Jay Thompson

"I found a lack of proper salary for a W2 and the need for some freedom necessary. It was luck that when my 1st wife got cancer (and subsequently died) that I could do caregiving and be a freelancer." ~ Rob Ainbinder

"I am doing it to supplement my full-time position. I have a fairly unique skill set that ranges from government affairs, which is where I started my career and what I do full time right now, to consumer insights and marketing strategy, which is something I've done a lot of over my career, have many years of graduate-level education in, and that I am passionate about. Freelancing is a way to keep all the tools in my toolkit sharp and to stay on top of my industry since it changes pretty much every day." ~ Amy Stanton

"I was working as a media executive for a large corporate radio group for 18 years. That's how long it took me to build my clientele. When Covid hit I lost half my business overnight. I decided that if I was going to build from scratch, I was going to do it for myself." ~ Andrew Ellenberg

"Mostly for time. I can create my own schedule, work when/where I want to, and choose whom I'd like to work with." ~ Tim Jacobs

What's your reason for freelancing after 50? I'd love to hear it. Drop me a note. 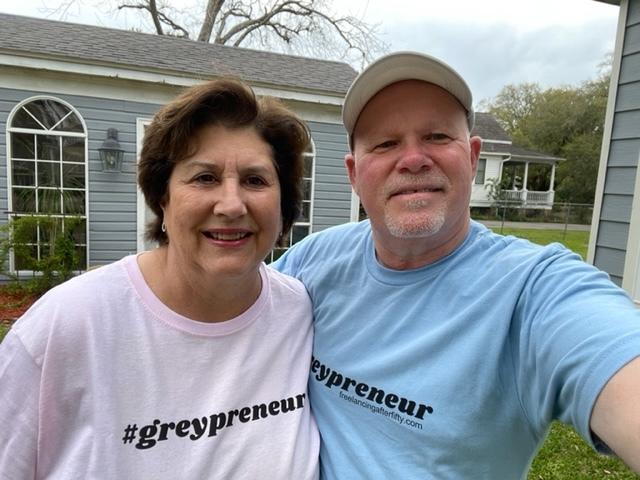 I have started a podcast, also called Freelancing After 50, to showcase 50+ freelancer stories and practical advice from subject matter experts. My first guest? My wife, Amie, a fellow "greypreneur" freelancer and partner-in-crime.

Are you a 50+ freelancer interested in being featured as a guest on the show? Let's talk.

Each edition, I'll provide you with a recommended resource. This time, it's Freshbooks, my absolute favorite invoicing and accounting software. Why? Glad you asked. Several reasons.

It's dead simple to use, affordable, and the company offers top-notch customer support. Add to that the fact you can integrate Stripe, PayPal, Fundbox (for factoring), get great reports, manage expenses... what's not to like. Let's put it this way, it's beats the heck out of using Word and Excel.

(They aren't paying me to say this BTW... no affiliate links, either. I can't think of another invoicing platform I would rather use.)

In case you didn't get your fill of the reasons why people 50 and over decide to freelancer, here's an entire list. Perhaps you'll find one that appeals to you.

Five Reasons Freelancing Is a Smart Choice for Retirees - This article focuses on retirees specifically, and lists reasons like earning extra income, not being bored, and meeting new people.

5 Reasons Why Becoming a Freelancer at 60+ Is the Best Option - Five more reasons, some of them are the same. My favorite: "Your life experience will protect you from swindlers."

Why Freelance Work Appeals to Many Older People - The article comes from AARP, so 'nuff said.

Best Freelance Jobs for People at the Age 50+

The types of jobs 50+ people can do run the gamut from programming to copyediting to designing to tutoring and more. Take that lifetime of experience and run with it. Here's a few ideas to think about. 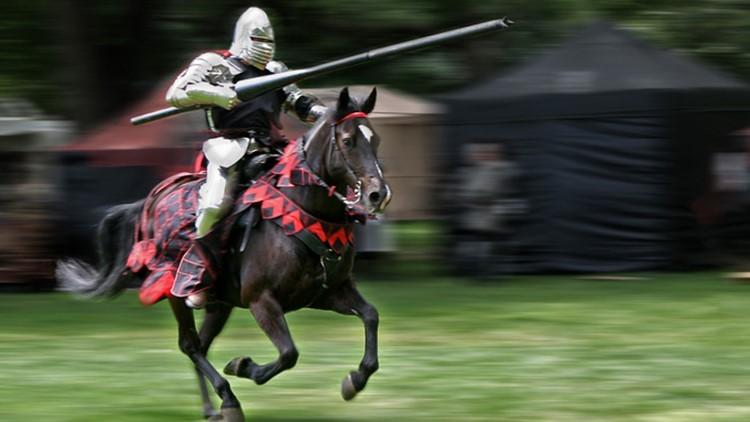 The 'Real' Meaning of 'Freelance' (It's Not What You Think)

The dictionary defines a "freelancer" as a person who works as a writer, designer, performer, or the like, selling work or services by the hour, day, job, etc., rather than working on a regular salary basis for one employer.

However, the term has a much more interesting history.

The earliest written evidence for "freelance" comes from Sir Walter Scott's Ivanhoe, in which a lord refers to his paid army of "free lances," a medieval mercenary who would fight for whichever nation or person paid them the most.

Yea, that sounds about right, don't you think?

Are You a 'Greypreneur'? Display it with Pride

I set up an online store featuring "Greypreneur" products, like t-shirts, tote bags, coffee mugs, caps, and more. Take a look around.

If so, please do two things: Let me know, and share it with your over-50 freelancer friends. Thanks!

See you in two weeks!

No spam, ever. We'll never share your email address. Opt-out any time.